Incel is a term that comes from the words involuntary celibate. It can be used of a member of an online subculture of men defining themselves as unable to find a romantic or sexual partner despite desiring one, but it can also be used to mean anyone in such circumstances even if they don't participate in incel discussions online. Some members of this subculture have committed mass murders, which some people are trying to use as justification for treating all men who cannot find relationships or sex as subhuman.

Definition from broadest to narrowest

In an interview with Chris Williamson, Naama Kates, who has spent years investigating incels, presented the following definitions for an incel, from broadest to narrowest:

The Wikipedia article about incels does not mention that this difference exists, instead Wiktionary does. The Incel Wiki presents the viewpoint that Wikipedia ignores, it only accepts the "life circumstance" definition for the word "incel" (however, it uses a lot of the "incel jargon", including the -cel suffix). The difference is mentioned on the discussion page on Wikipedia under the by-default hidden "Frequently asked questions (FAQ)" section, where Wikipedia writes as follows:

Q1: What is the subject of this article?

Q2: Why is this article only about the subculture/community of self-identified "incels", and not about the idea of involuntary celibacy more broadly?

A2: It is the subculture which has achieved notability independent of concepts Wikipedia already covers, such as sexual frustration, celibacy, and sexual abstinence. Although a separate article about the broader concept of involuntary celibacy could be created, such articles have been deleted in the past in favor of coverage in existing articles.

Q3: Why is this article so negative?

A3: Articles on Wikipedia reflect the way subjects are covered in reliable, published sources with a reputation for fact-checking and accuracy. The articles cover aspects of those subjects in accordance with the extent to which those aspects are covered in reliable sources. There are negative elements of the subject in this article because that is the way many of the reliable sources cover it. If coverage of the subject changes, the article should be updated to reflect that.

On August 16, 2021, a few days after the Plymouth shooting, an interview of Laura Bates on incels was published on the YouTube channel This Morning. Criminologist David Wilson was also heard in the video. In that video, David Wilson said that he would classify all about 10,000 UK incels as terrorists.

Eamonn (interviewer): "Ten thousand what? Ten thousand oddballs, ten thousand terrorists? How would you classify them?"
David: "I absolutely would classify them as terrorism. I mean, what is terrorism in terms of our legislation? It's the intentional use of violence to intimidate the public, and that's what they want to do. The, their get out of jail free clause, as it were, in terms of our legislation, is that this is intentional use of violence to intimidate that doesn't have a religious or a race or a political, either far right or far left ideology behind it, but the Devon and Cornwall police's rush to say this wasn't terrorism seems to me to have been very short-sighted indeed, because at the end of the day, Eamonn, Ruth, we are dealing with people who, because of their extreme misogyny, are targeting a specific group of people, women. This is an extreme form of hatred against women and we have to start naming it for what it is, and frankly it is terrorism."
Ruth (interviewer): "The Devon and Corn police actually, David, say the decision that this incident was not a terrorist incident was made by the National Counter Terrorism network following a referral from Devon and Cornwall police, so they're saying that came from above them."

Later that same month, Alison Tieman and Brian Martinez from Honey Badger Radio did two livestreams criticising this interview. Here are some things Brian and Alison talked about:

Starting from 2:00:43 of the second response video you can hear Laura calling the incel community a "very racist community" and white supremacy a "deeply misogynistic ideology." Brian responded that race has nothing to do with it, and that Naama Kates has noted that the most vocally frustrated members are nonwhite as their race gives them a disadvantage with women. These are Asian and Black. According to Brian, being a nerdy autistic black guy who lives in the hood is hard, because black women (referring to US black women in the hoods with lots of violent crime) select their men for their dominance. This is a product of feminism and the welfare state, among other things.

At 2:10:44 of this response (12:20 of the original video on the This Morning channel), Eamonn the interviewer asks Laura about how frightened Laura is for her own safety. Laura answers that she would be more frightened if she were in the United States. As her "evidence", she brings up Roy Den Hollander (without mentioning his name), the man who killed Marc Angelucci and US District Court Judge Esther Salas's son as well as injuring her husband. Zero women were killed. "So two men are dead, women most affected, is that right?", asked Alison at 2:12:26. As Alison said at 2:14:48, Laura was using a murder of an MRA to paint herself and other feminists as victims.

What this labelling seems to imply

Since some people call MGTOWs "incels in denial" (see e.g. here) it is not far fetched to say that in the future all (long term) single men will be called "terrorists" as there is nothing really preventing officials from refusing to believe a voluntarily single man when he says he's single voluntarily. This would essentially eliminate men's ability to choose how they want to arrange their way of living: all men would be forced to live in relationships or else they will be called terrorists. The discussion on how this affects aromantic asexual men is yet to be had. So far, asexuality and aromanticism are seen as something you can self-identify as (see here and here; this article explicitly states in its title that "Asexuality is Not a Diagnosis"), but the labelling of incels, and subsequently MGTOWs as terrorists might lead to the requirement for asexuals and aromantics to seek diagnosis to avoid being branded as terrorists. At least one asexual man has already had the fear of being labelled an incel, and in the future this may become an even larger threat.

"You almost certainly have incels as employees"

At the beginning of May in 2018 Ellen K. Pao commented on incels:

"CEOs of big tech companies: You almost certainly have incels as employees. What are you going to do about it?"[2][3] 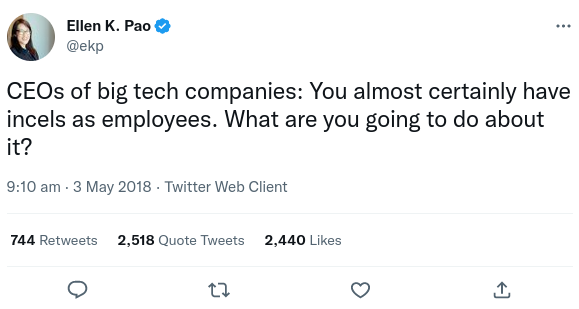 Because of the confusion between the subculture and the life circumstances, can be interpreted either now or in the future as a call for removing sexually undesirable men from their workplaces.