A high proportion of human societies have chosen some form of gender segregation and it is one of the biggest criticisms westerners often level at non-western societies. In recent years there is evidence that western civilisation may be adopting increased gender segregation but only when it excludes men. A lot of gender segregation in western countries is being driven by feminists who state that they often feel threatened by men, sometimes merely by their presence.[1]

There is a Lesbian-only cemetery in Germany.[2]

Throughout the world, domestic violence shelters are nearly universally available only to women.

Women-only gyms are common throughout the west and widely known about.[3]

There are a few hotels around the world that advertise as men-only although it is unlikely that this is enforced in western nations.

A women-only market has recently opened in London.[9]

In 2018 the Statement festival was held in Sweden. This event was only open to non-men.[10] The festival was found to be in violation of the country's discrimination laws.[11]

The Lick club is a women-only event held at night clubs around the UK.[12]

Australia, China, Kuwait, Malaysia, Indonesia, Austria, Italy, and South Korea now have women-only parking spaces in some areas.[13] [14] [15] This practice is even more widespread in Germany.[16][17] The town of Triberg in Germany created male-only and female-only parking spaces, allocating the more difficult parking spaces to men.[18] It is unclear if the town had to backtrack under feminist pressure.

An insurance company in the UK has seriously suggested road lanes exclusively for female drivers.[19] 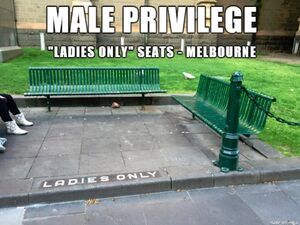 Some public spaces in Australia have women-only seating.[24] The image to the right shows such seating in Melbourne.

Jessica Valenti, a well known feminist blogger, has explicitly proposed gender segregation on public transport.[25] Some countries are already doing this. There are women-only bus seats in Switzerland and India.[26][27] There are women-only train carriages in Malaysia[28], Germany[29] and other countries. There has even been a proposal for women-only seating sections on aircraft.[30]

Men are not permitted to travel on trains during certain hours in Chennai, India.[31]

Women only restaurants are becoming common.[32]

McIver's Ladies Baths is an ocean pool owned by a local city council in Australia. The Baths are open to women and children only.[34]

New York City has a women-only taxi service.[35] Although they have apparently had trouble finding sufficient female drivers. A similar service has been proposed for Melbourne, Australia[36], and is in use elsewhere.[37]

Women-only ride sharing service operate in several large Australian cities[38] and in US states such as California.[39]

US universities have female only education sessions.[40]

The US has a growing number of female-only co-working spaces.[41]

This raises the interesting question about whether it was women who drove segregation in other societies. This would be interesting considering that gender segregation in non-western countries today is often claimed as principally disadvantaging women.

It may be reasonable for a society to permit gender segregation, but it must be on just and equal terms. Thus a society should permit both men-only and women-only organisations only if they are available on equal terms. A society should allow both or it should allow neither. Currently women in the west continue to enjoy uninterrupted access to women-only spaces and organisations while men are today largely prohibited from having men-only spaces and organisations.