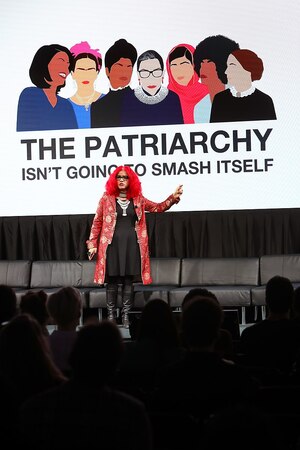 Mona Eltahawy is an Egyptian-American feminist who seeks to destroy The Patriarchy.[1] Eltahawy describes herself as a secular, radical feminist Muslim.[2]

Eltahawy appeared on the Australian TV show Q&A on November 4, 2019 which was held in conjunction with the feminist Broadside conference.[3] During the show, she promoted violence against men and endorsed Nayuka Gorrie advocating for the complete abolition of police.[4][5] The episode was subsequently taken down by the Australian Broadcasting Corporation although it remains widely available online. Eltahawy opposed the removal of the episode and has subsequently indicated that she stands by the positions that she expressed on the programme.

Knowing that this is very disturbing, I ask people to imagine — now I'm using this word imagine, and I'm underlining it three times — a scenario in which we kill a certain number of men every week. How many men must we kill until patriarchy sits across the table from us and says, "OK, stop. What must we do, so that you can stop this culling?" Now I'm saying imagine. I'm not saying go out there and kill 100 men today. I'm saying, just imagine this very, very disturbing scenario. [6] [7]