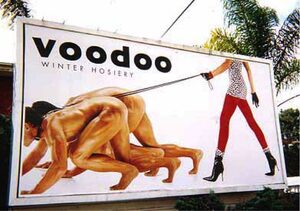 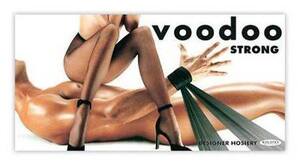 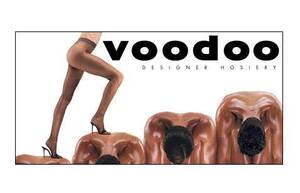 Starting in 2002 (and as of late 2015), Australian based company, Voodoo released an ad marketing campaign featuring men being objectified, and to some extent, being abused. The company is known to feature women wearing their products and dressing in provocative ways, strongly hinting at nudity without actually showing it. This series of advertising differed from their normal type of advertising, showing women having power and control over men to the point of humiliation and degradation.

Voodoo's "men-on-leash" ad generated about 60 complaints to the Advertising Standards Bureau. All were dismissed. The ABS apparently appreciated the humour, reasoning: "This ad clearly intends to depict a tongue-in-cheek view of the well accepted right of a woman to be in control of her choices and her 'accessories'."[1]

Various complaints have been made against these misandric advertisements.[2]

“It depicts men as animals and honestly puts the fight for gender equality back fifty years.”

“This ad is suggestive that men are dogs, are not worthy of wearing clothing and need to be tied to a woman who has the power. It also suggests that a woman can have more than one man. Both of these points contravene the social morays that are part of today’s society and involves discrimination of men as a lesser sex rather than as an equal.”

“This is a moral issue that degrades human value and worth, it brings humans down to the level of animals. For some of the elderly it may bring back memories of war and mistreatment as prisoners of war/slavery. This may also encourage the imagination of some in this direction/treatment of others.”

“I strongly object to this ad’s being placed in the public view where my children were forced to view it today…It is clearly degrading to men to be depicted as some kind of sex slave.”

“Whether some may consider this demeaning to men or women is irrelevant I personally as an adult woman amjme with it … But I do know it has an impact on children. They are the issue.”

“Why do we seem to have one set of standards for women’s representation and another for men?”

“I genuinely feel distressed by seeing this…Such images one might expect in pornographic literature but should not be in the general viewing space.”

“I am greatly concerned of the possible impact this sign could have on impressionable persons. In my view, the sign is suggestive of a gross violation of dignity and of human rights and should not be seen in my country, Australia.”

“This kind of ultra feminism sends the totally wrong message to families where kids and young women think this is acceptable to treat men as ‘pets’ … it’s emasculating and derogatory and heel grinding.”

“I have two daughters aged 4 and 7 and I must ask them to close their eyes every time we pass it. I believe we should have the right to preserve the innocence of our children and not have this type of thing forced upon us.”

The Advertising Standards Board (‘the Board’) considered whether this advertisement breaches Section 2 of the Advertiser Code of Ethics (‘the Code’).

Displaying this here to show a contrast of what was deemed misogynistic.

In 2005, an ad depicting a woman wearing very little next to a man fully clothed was believed to be depicting oral sex. The Advertising Standards Board (“Board”) considered whether this advertisement breaches Section 2 of the Advertiser Code of Ethics (the “Code”).

Complaints were recevied concerning these advertisements.[3]

It should be noted that the advertiser for this campaign was led by a mostly female team.

Complaint #1 Response: - The females are in swimwear, not underwear as well as clothing - There is no scene where the camera zooms in on her vagina or her bottom and she is not in underwear, she is in swimwear - There is no intended sexism in this advert nor is there an intention to display disrespect to women - The girls are dancers and just like ballerinas wear leotards these girls have specific dance costumes

Complaint #2 Response: - The female models were wearing swimwear not underwear - Shots are choreographed as a dance sequence as apposed to close up shots on bottoms to which there are none - any close up shots are to represent the mood and/or highlight the product

Complaint #3 Response: - The men's shots are full looks of styles suggested to wear with the product - No element of this is sexist, the group are having fun together