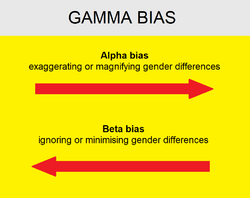 Theories on the purpose of gamma bias

Hypotheses regarding the growth of gamma bias and the disfavoring of males include evolutionary pressures for males to protect and provide for women which involves a reluctance to view men as vulnerable, or alternatively the sociological explanation of 'ingroup' and 'outgroup' bias which may have developed around men and women in the form of social conventions.[3]

A further explanation is provided by gynocentrism theory [4] which posits an increase of narcissism among women in the context of heterosexual relationships and exchanges, demonstrating what Robert Millman has called 'acquired situational narcissism'[5]. Gamma bias is used to support this dynamic and ensure that women are beneficiaries of narcissistic reassurance. This theory further assumes that gamma bias can be witnessed in most ‘narcissist to non-narcissist’ relationships.